Meals from scratch + a clean home = homemaking the southern living way! Let's create the life you love - in the home you love!
118shares

How To Age New Galvanized Containers / How about those galvanized containers? Don’t you just love ’em? I sure do, but I don’t love how shiny they are when they’re brand new. Read on to see you how you can get rid of that bright, shiny metal with three basic household ingredients. 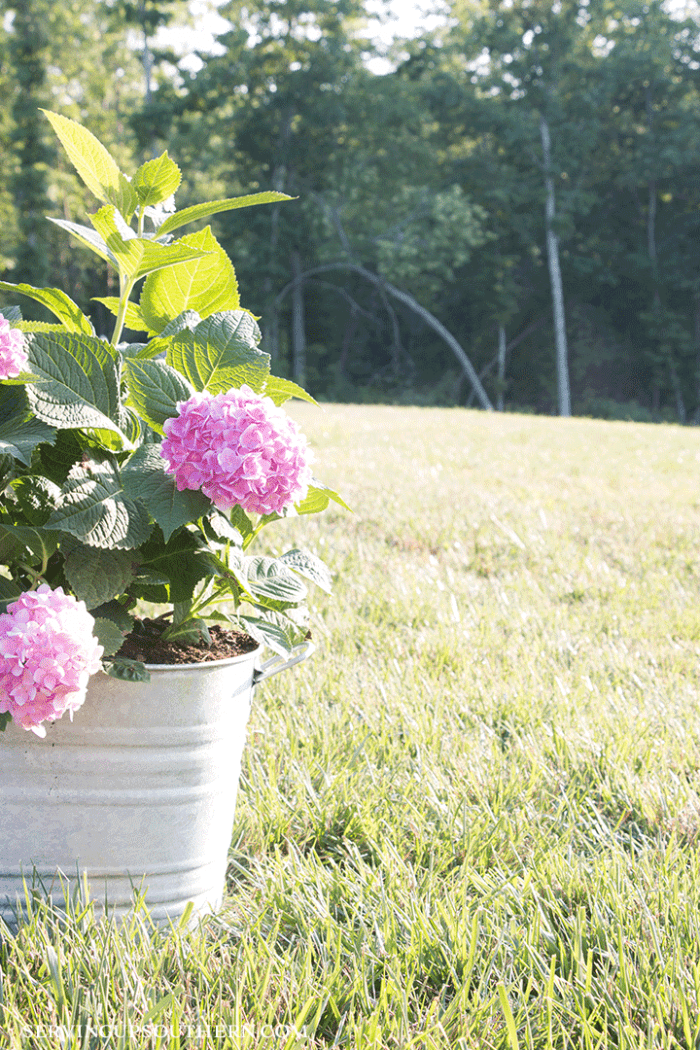 So, have you ever wondered How To Age New Galvanized Containers? I finally figured out an easy way to do big containers that don’t involve soaking them, and it’s super easy.

My favorite way to use galvanized containers is for planters. I love the rustic character they give a porch, especially when they’re showing off pretty flowers. But before I go planting anything that bright shine has to go.

A Couple of Way Of How Not To Age Galvanized Containers

There are so many ways to “age” the finish on galvanized metal, but some of those ways use chemicals that I would rather not use. One of the most popular ways is using toilet bowl cleaner. I did my first galvanized container using that method. It didn’t work as well as this technique, and I hated the smell that came with the project. Even outdoors it was very strong and not what you would want to be smelling or breathing for that matter. Another method calls for vinegar and peroxide to be mixed. While these two ingredients are seemingly harmless, mixing the two creates peracetic acid which is not a good idea. The method I prefer uses these two ingredients but in a much safer way.

I started with four tablespoons of salt with vinegar in a spray bottle. Shake the bottle until the salt has dissolved.  Then I put some peroxide in a separate spray bottle.

Get your shiny new galvanized container. Here is the container I started with.  (I did these in our driveway (on the gravel) because I didn’t want the salt to kill any grass.) 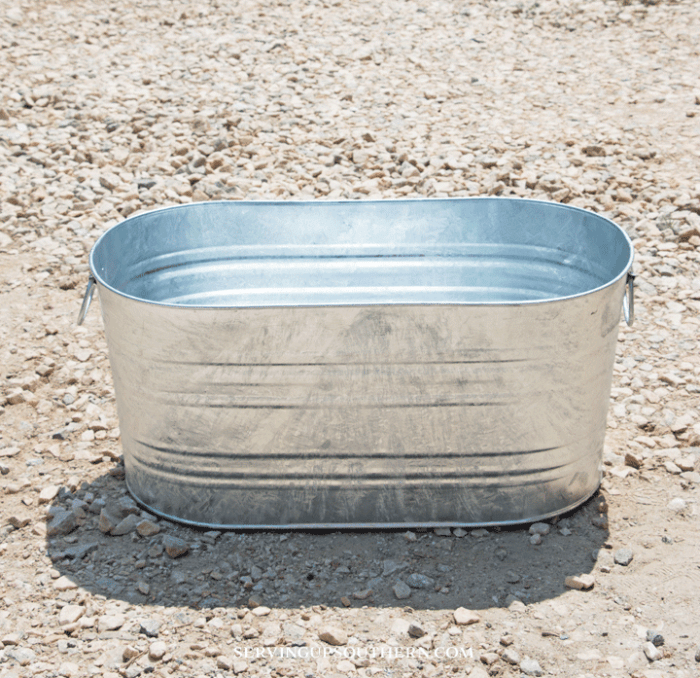 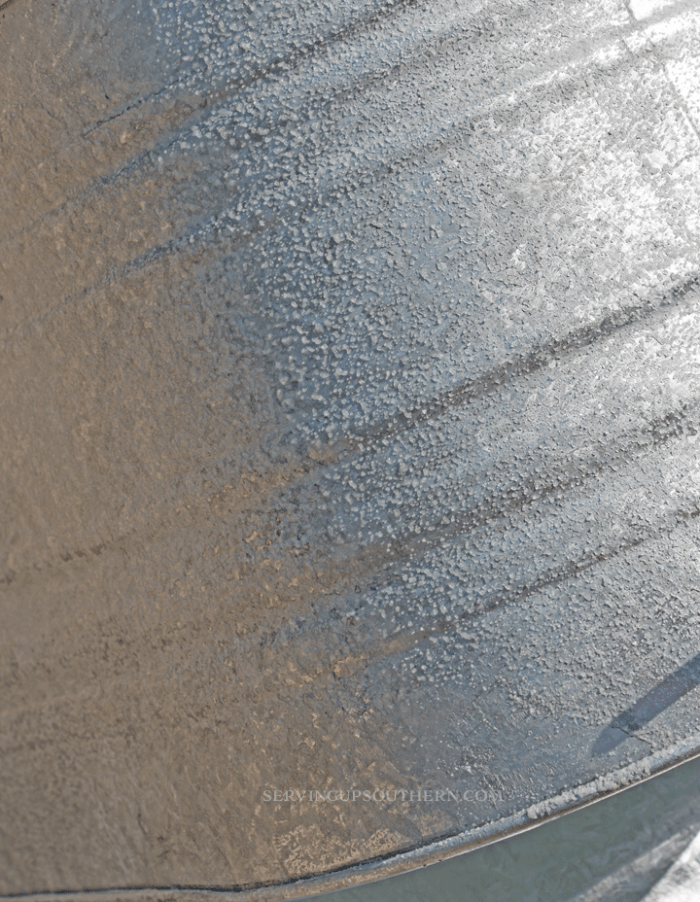 I wanted the salt completely coating the container. As it’s out in the sun, it will dry. I took the spray and misted it carefully. You don’t want to make the salt run. You just want to make it damp again. I did this several times for about an hour.  Here you can see how the mixture is already dulling the finish on the container that is treated. 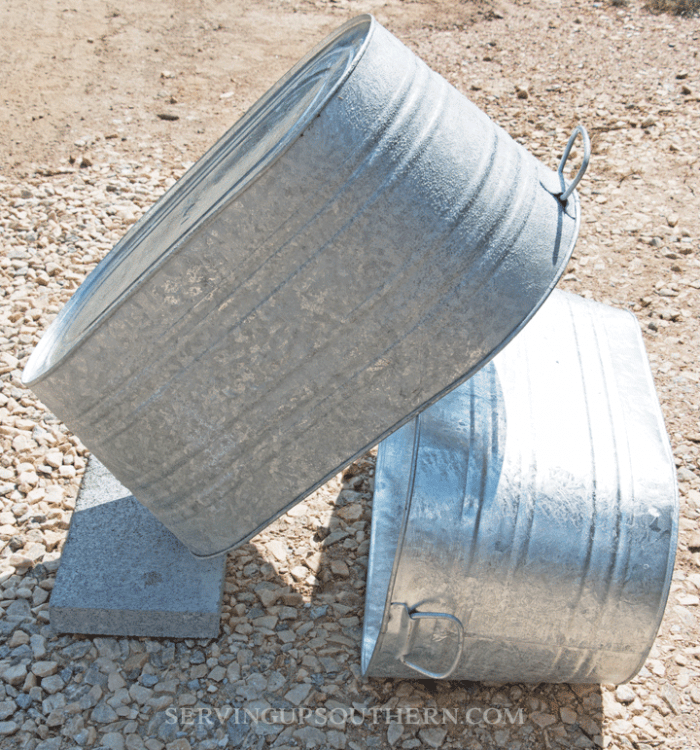 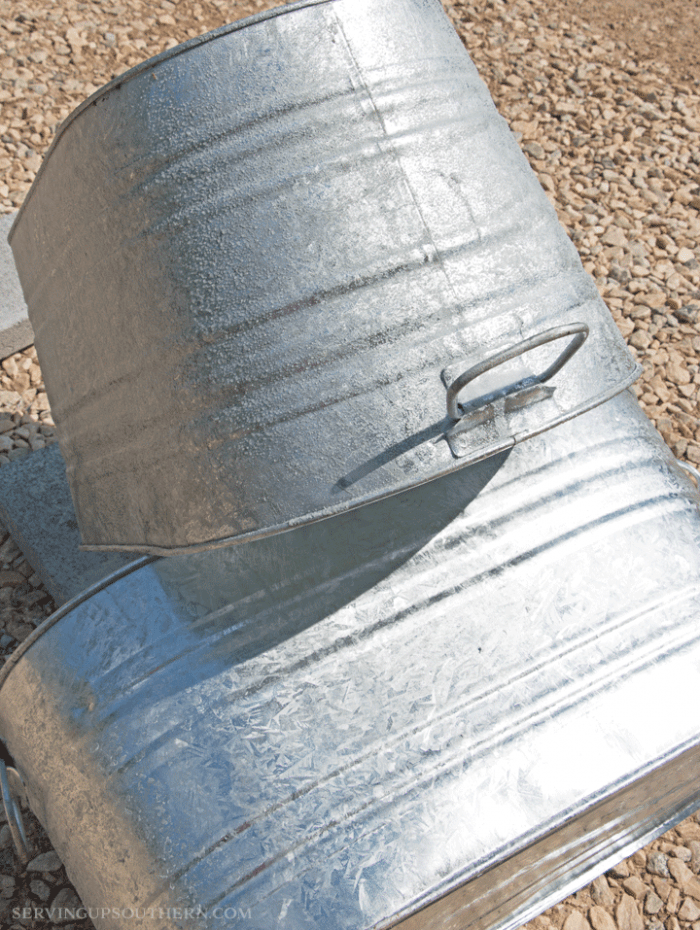 After an hour, I switched to the peroxide and sprayed it over the dried salt and repeated the same process as before. I continued to spray them during the next hour using only the peroxide. Then I took the water hose and rinsed the salt off of both containers and let them dry. That salt really dries on hard, so you have to give it a really good rinsing. 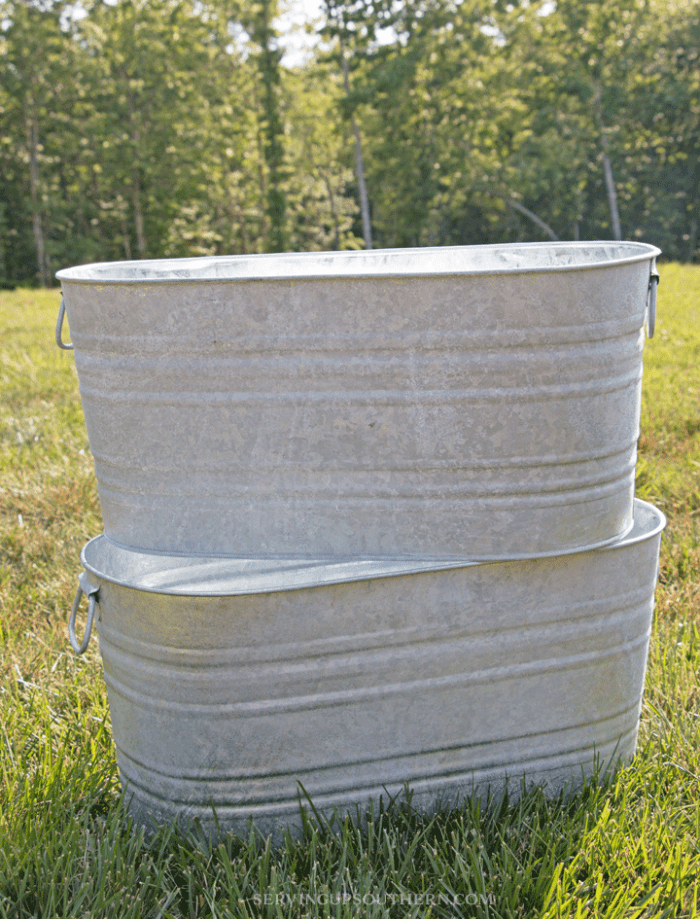 I was super happy with the results. As you can see, both containers have a perfectly dull and aged looking patina. They are ready for planting.

And that my friend, is How To Age New Galvanized Containers. Do you love galvanized containers? What are your favorite ways to use them? 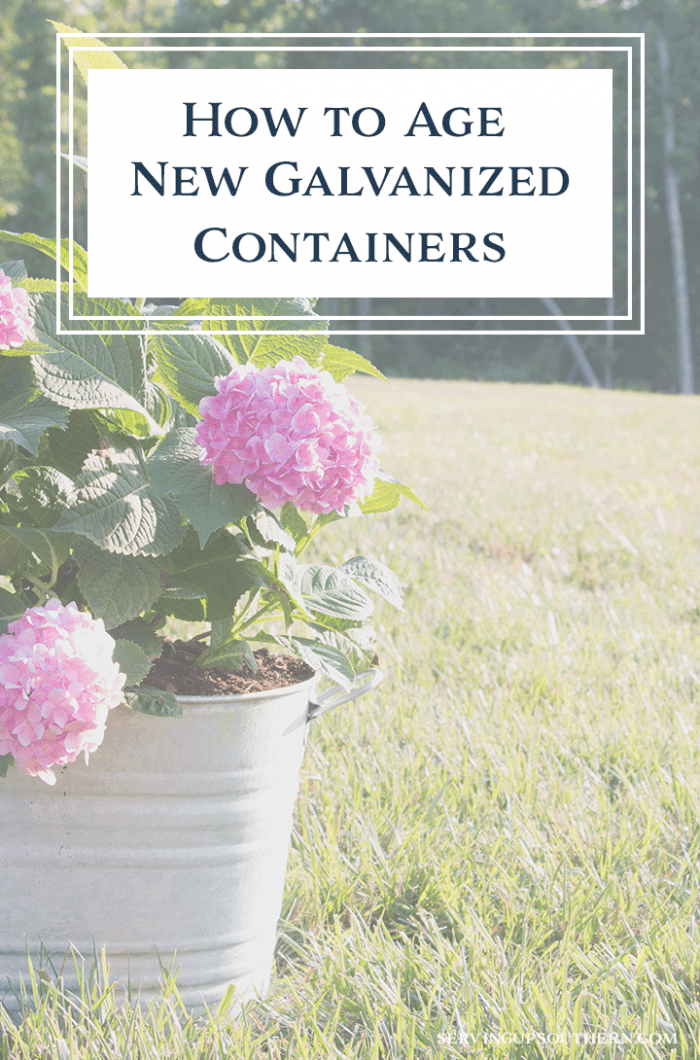 How To Write A Thoughtful Thank you Note 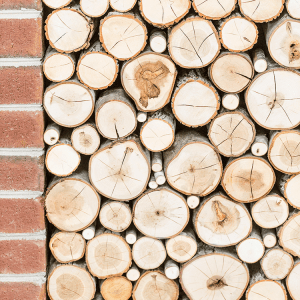 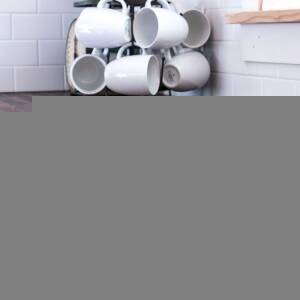 How I Protect My Butcher Block Countertops

Previous Post: « How To Write A Thoughtful Thank You Note
Next Post: A Simple (New) Metal Flower Pot Makeover » 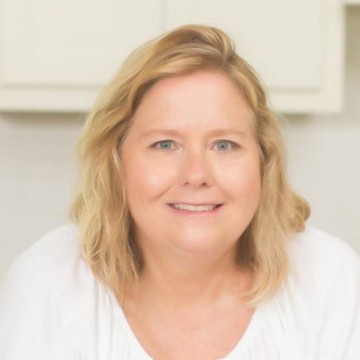 I'm Kim! Thanks for stopping by! I love the art of homemaking and making a house a home. I hope to help and inspire you in your homemaking journey while finding contentment along the way. Read More… 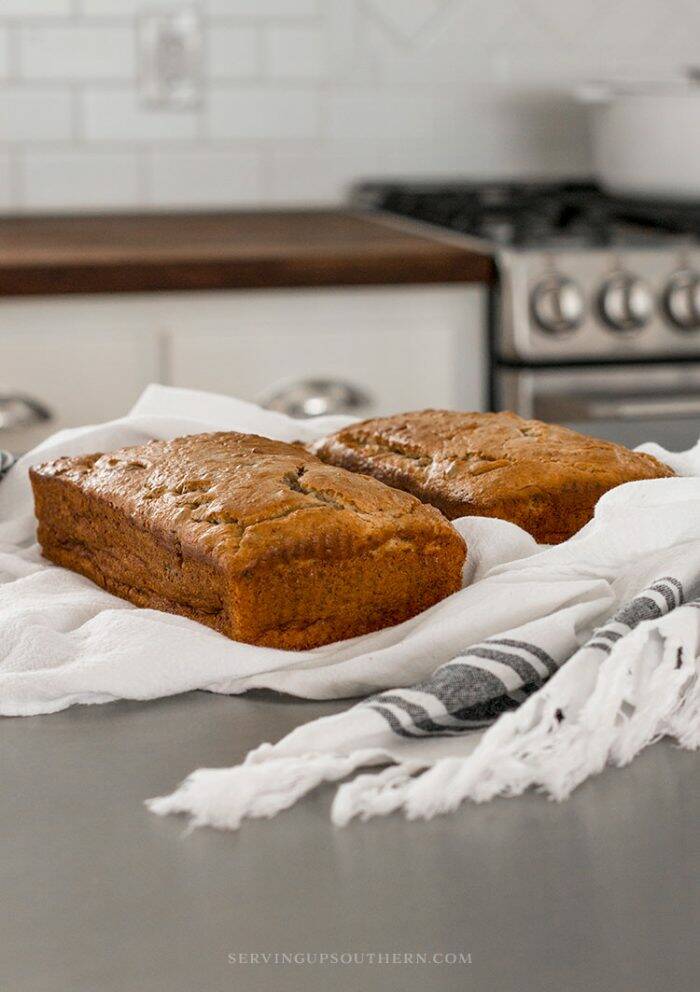 This is the only pe crust recipe you'll ever need!

If you cook or bake, there will be messes in the k

I've been known to make pumpkin bread any time of

Aren't these the cutest? A last minute Halloween t

I love this marinated summer salad! It's a great c

Kicking off summer with this fun hand-painted summ

Don't we all love a good barbecue sauce? Delicious

This beautiful bathroom makeover by Angela from @

This Afternoon Tea in the Bluebonnets from @botani

Are you struggling with your home? Imagine being the maker of a beautiful and purposeful home that runs smoothly! Let me help – together, we can do this!

stay up on the latest!